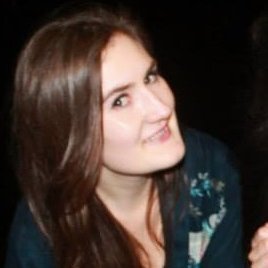 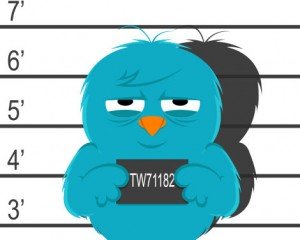 We may have been providing expert web hosting for over ten years, but recently we decided to take Kualo into the unknown, into uncharted internet territory - Twitter. It's been a learning progress and you know what they say, learn from the best. So we've been looking at big businesses on Twitter, to find out which companies are putting the social media platform to good use and how we can learn from their examples. But along the way we discovered some Twitter accounts that weren't getting it quite right, that were in fact getting it very wrong. Luckily for us, there are lessons to be learnt from these very public mistakes and so before we give you our 'Top 3 Businesses on Twitter', here are our 'Top 3 Business Disasters on Twitter':

Earlier this month, British Gas took to Twitter to field questions from customers on the same day that they announced a 9.2% price increase. Perhaps the marketing team thought a Q&A session would create a sense of transparency; they should have foreseen the scathing nature of the questions coming their way. The exercise achieved nothing, apart from tarnishing the company's reputation.

Don't use Twitter to highlight negativity towards your business. Dealing with complaints on Twitter is one thing, asking customers to shower you with abuse is another. Twitter can be put to great use as a customer services platform, but only if it is genuinely going to help your customers. British Gas didn't hold the Q&A session to help customers; they were hoping to improve their image in the wake of the price increase and that's why it didn't work. They did actually provide honest answers to some of the more sincere questions about profit margins and energy prices, but this went virtually unnoticed - the media focused on the humorous tweets and declared the whole thing a 'public relations disaster' (The Guardian).

The Irish airline's CEO has been known to take on a hands-on role when it comes to their social media strategy and write some of the company's tweets himself. Tweets like '@BMacGo tantric sex. works for sting... n me! #AskMOL' and '@obsqure hey its 3pm on friday. cocktails, dancing girls, party time just another busy day forRyanair's ceo. #AskMOL' 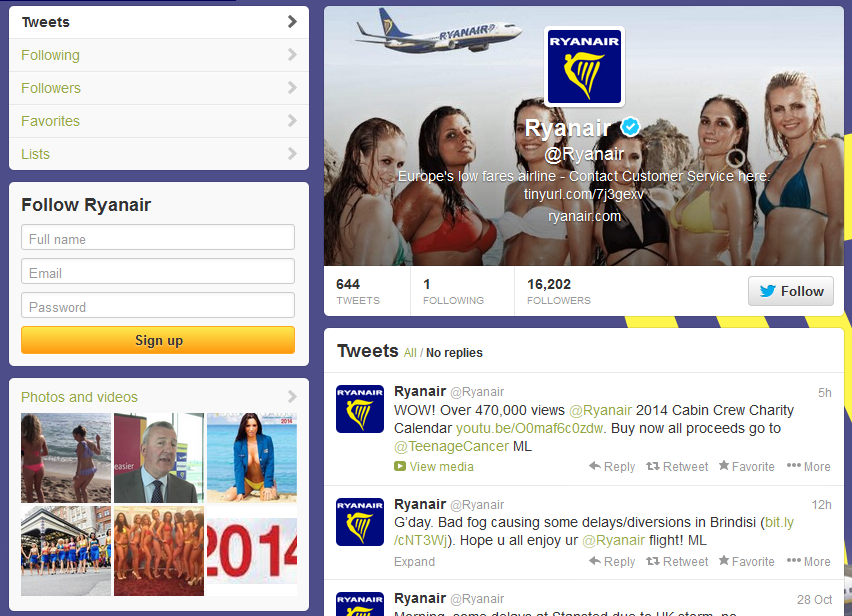 Know when to draw the line. Twitter can be a great way of personifying your business, but you don't want your company to become a person everybody hates. With their Twitter account Ryanair have tried to create a tongue-in-cheek, controversial brand identity, which is fine in theory, but they've taken it too far.  In a recent Q&A session- #AskMOL- the CEO was trivial and a bit impolite. One Tweeter asked why Ryanair charged for reprinting boarding passes and was answered with another question: 'Wud u show up w'out passport?' Twitter can be an informal, fun platform but don't forget you are still representing your business!

During the 2011 Egyptian Revolution, an American clothes designer took advantage of the Cairo hashtag trending on Twitter to promote his new fashion collection. At the time Twitter was awash with news of the violent riots in the capital and Kenneth Cole wrote 'Millions are in uproar in #Cairo. Rumor is they heard our new spring collection is now available online at (link to website).' It seems the designer didn't learn from the incident as only two months ago he referenced the trouble in Syria in a trivial tweet about footwear:

Don't misuse hashtags. Kenneth Cole is not an exception- the internet is awash with stories of corporate Twitter accounts hijacking trends and popular hashtags in an attempt to promote themselves, like the UK clothing line that tweeted '#Aurora is trending, clearly about our Kim K inspired #Aurora dress ; )' the day after the massacre in Aurora, Texas. Whether you haven't done your research (the clothing line claims they hadn't seen the news) or you just want to get  more exposure, never use hashtags in the wrong context. At best, you'll look like you don't know how to use Twitter properly. At worst, you'll garner negative press. The key thing to remember with all these 'bad Twitter' examples is that when businesses make mistakes on Twitter, the media quickly picks up on it.

Saying that, here's our 'Top 3 Businesses on Twitter', starting with a company that did actually divide opinion in the press about whether its recent Twitter campaign was a coup or catastrophe...

Back in September, Waitrose asked Twitter followers to finish the sentence "I shop at Waitrose because..." and include the hashtag #WaitroseReasons. The supermarket was ridiculed with tweets like "...because I was once in the Holloway Road branch and heard a dad say 'Put the papaya down, Orlando'". However, the light-hearted tweets made the hashtag more popular and cemented Waitrose's reputation as a high quality supermarket. 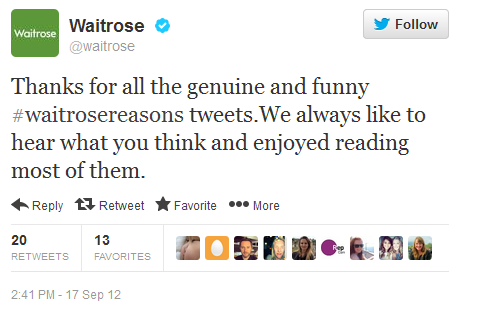 Understand Twitter. Twitter can be a spontaneous, informal platform, remember this and use it to your advantage. The tweets might not have been what Waitrose was expecting, but the fact is the #WaitroseReasons campaign wouldn't have been as popular if people didn't respond with funny tweets. Nobody would have retweeted or favourited banal Tweets that praised the supermarket's staff or wine selection. What's more, the ridiculing tweets didn't show the supermarket in a bad light, all they did was reaffirm Waitrose's reputation as the most upmarket supermarket in the UK, in a way that the brand would never get away with. Imagine the uproar if Waitrose put up billboards emblazoned with: 'Waitrose... because Tesco doesn't stock unicorn food.' (One of the genuine responses on Twitter.)

The airline has been praised for its hands-on approach to customer support through Twitter, replying to customers and taking the initiative to help them in any way they can. The Twitter team defused panic surrounding a recent bomb hoax on one of their flights, by tweeting passengers on the grounded plane and finding out what was going on as quickly as possible. They engage with the press and customers in real time. During another incident, when there was a fire at Chicago airport, American Airline not only responded to customer's tweets, but they acted upon them, even holding a plane for a man and his young son who contacted them through Twitter. 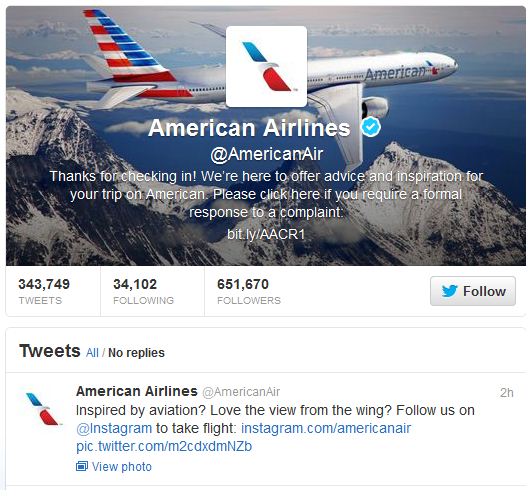 Take customer services seriously. If you're going to use your Twitter account to provide customer service, make sure you do it properly. Large businesses need a large staff to manage their Twitter account- @AmericanAir is managed by a staff of fifteen- especially if you are a business that tends to get a lot of complaints or queries, like an airline or a technology business. Customers should feel that tweeting your Twitter handle will actually result in a solution to their problem. If, as we've already seen with British Gas, customers don't believe your Twitter account will be of any service to them, they are more likely to tweet abuse and non-constructive criticism.

During his campaign to be re-elected president last year , Barack Obama's publicity team used Twitter as a serious marketing tool to promote 'Brand Obama'. When election events were showing on television and Americans watching at home were on Twitter discussing the event, Barack Obama's team used Promoted Trends to influence the topic of conversation. When Barack Obama was reelected, the tweet below became the most retweeted tweet of all time: 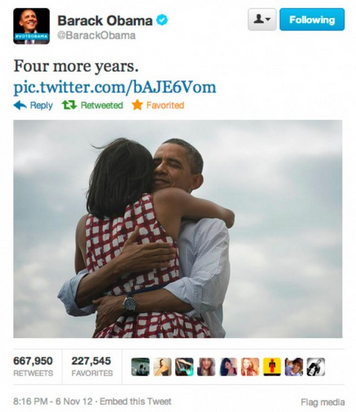 Have a strategy. Barack Obama's team didn't decide to use Twitter so that the presidential candidate would seem more approachable and 'down with the kids; they went it with a detailed marketing strategy. Photos and videos they posted were shared around the world and they delivered news related to the campaign in real time. Their Promoted Trends were carefully timed in order to have the biggest reach, targeting the whole of Twitter, not to mention every American on the site, in a campaign that was ultimately 100% successful.

Don't be too informal and blasé.

Do take advantage of the fun, light-hearted aspects of Twitter.

Don't use Twitter to deliberately offend or provoke people

We're not saying we're the experts on Twitter, but after our research we certainly have a better understanding of good Twitter practice for businesses and we hope you do too!

Tabitha is a marketing superstar. She helps our customers make the most of their web sites' and advises on marketing, SEO and social media management.