Starting a web site? Make sure you choose a green web host!

Picture the scene... It's a Sunday morning. You've sat down with your coffee and croissant, and you decide to read the news online, check your email or or watch the latest YouTube sensation. This little scene may seem innocent enough, but did you know that what you've just done has an environmental impact? Would you be surprised to learn that it contributes to a beast that generates about the same amount of carbon emissions as the entire aviation industry?
It's a little-known fact that the Internet is a filthy, carbon emitting monster. As ephemeral as it all seems, it's easy to forget the real-world mechanics that go into keeping the Internet running. A web site is housed on a server in a datacentre - a building packed top to bottom with servers full of the web pages, videos, online applications and downloadable files that make the modern online experience possible. All these servers require electricity to keep them powered up, and then almost as much again to keep them cool. To generate much of that electricity, fossil fuels like coal and gas are usually being burned.

According to Dr. Alexander Wissner-Gross, an Environmental Fellow at Harvard University, every second that you spend browsing the web puts 20 milligrams of CO2 into the atmosphere. That might not sound like much, but when you add together all the millions of people browsing the web each day for hours on end, it all adds up to a staggering amount. Put another way, the Internet releases around 300m tonnes of CO2 – as much as all the coal, oil and gas burned in Turkey or Poland in one year, or more than half of those burned in the UK.

To help explain this, take a quick peek at this short video courtesy of the Australian Broadcasting Corporation, which sums it all up very nicely...

So, should you shelve your web project, mourn your losses and go hug a tree?

Well, hug a tree if you like, but rest assured your Internet dream can live on. Just grab one of our tasty green web hosting plans and your web site will be just about as green as can be. Centro, our primary UK datacentre, is 100% powered by electricity generated from renewable sources. Not a single amp of power comes from burning any kind of fossil fuel whatsoever. 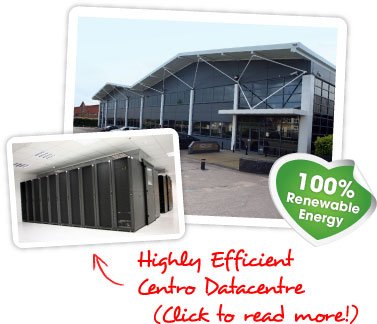 We go even further than that. Not only do our servers hum along on renewable energy, but, through highly efficient design, the facility uses as little electricity as possible to keep everything fully functional. In the typical datacentre, a huge amount of energy is used to keep the servers cool - generally this is because inefficient design principals have been employed. In the vast majority of datacentres, the server rooms are kept exceedingly cold, but the servers sit there blowing out a heap of hot air back into the room. A huge amount of energy is thereby wasted constantly having to re-cool that hot air again, causing the cooling systems to work harder and consume more power than they ought to.

In Centro, the hot air expelled from the servers is contained and directly extracted from the building, meaning the cooling systems can operate much more energy efficiently. The super efficient water-based chillers additional use 'free cooling' technology, which means that when it's cool enough, the outside air can just be pumped through rather than waste energy keeping the chillers running at full-speed.


Make the switch to a green web hosting plan today!

Ensure that your web site is as green as can be and host it on a great value, environmentally conscious hosting plan from Kualo. you can be assured that you have done evrything possible to minimise the environmental impact of running a web site, and with plans starting at just £23.40 per year, it needn't break the bank either!

We've been hosting web sites for more than a decade, with tons of very satisfied customers - read some reviews! Try us risk free, backed by our 60-day money back guarantee!

We're determined to only have a positive impact on our environment. Find out why we're becoming a climate positive business, and how you can help.