Earth Overshoot Day. It's not one of those holidays that you're probably familiar with. It's far less known than "Pancake Day", and much less fun than Appreciate a Dragon Day. Unfortunately, it's significantly more depressing. Earth Overshoot Day marks the day that the world has used as much from nature as the planet is capable of renewing in a whole year. And this year, it arrived far earlier than ever before - five days earlier than in 2015, and eleven days earlier than 2014. The day will most likely have passed you by without notice. Your life will have continued as it did before. Yet this day is a red flag, a warning that we humans are collectively draining the planet of its resources at an ever increasing pace.


Earth Overshoot Day was first devised in 2006 by think tank Global Footprint Network. It uses a simple formula which takes the planet's 'biocapacity', i.e. total available natural resources, divides it by humanities ecological footprint, and then multiplies it by the number of days in the year. Back in 2006, it fell in October, and its been falling earlier and earlier each year since.

More shocking still is looking at the calculation on a per country basis, where it becomes apparent how much more resources some countries use on a per capita basis compared to others.

This graphic shows how many Earth's we'd need to support the world's current ecological footprint, if every single person on the planet used resources at the rate that certain countries do. Clearly there's a lot that needs to be done for us to live sustainably.

Carbon emissions are included in the ecological footprint, with electricity accounting for 38%. As a business ourselves who consumes an awful lot of electricity to power all our servers, statistics like this only go to show why it's so important that we power our servers with renewable energy. It's a little known fact just how much carbon the Internet produces annually, which is why choosing a Green Web Hosting plan is one small step to helping ensure that you help minimise your impact on the planet. The infographic below is a scary representation of just how much carbon the Internet produces each year. 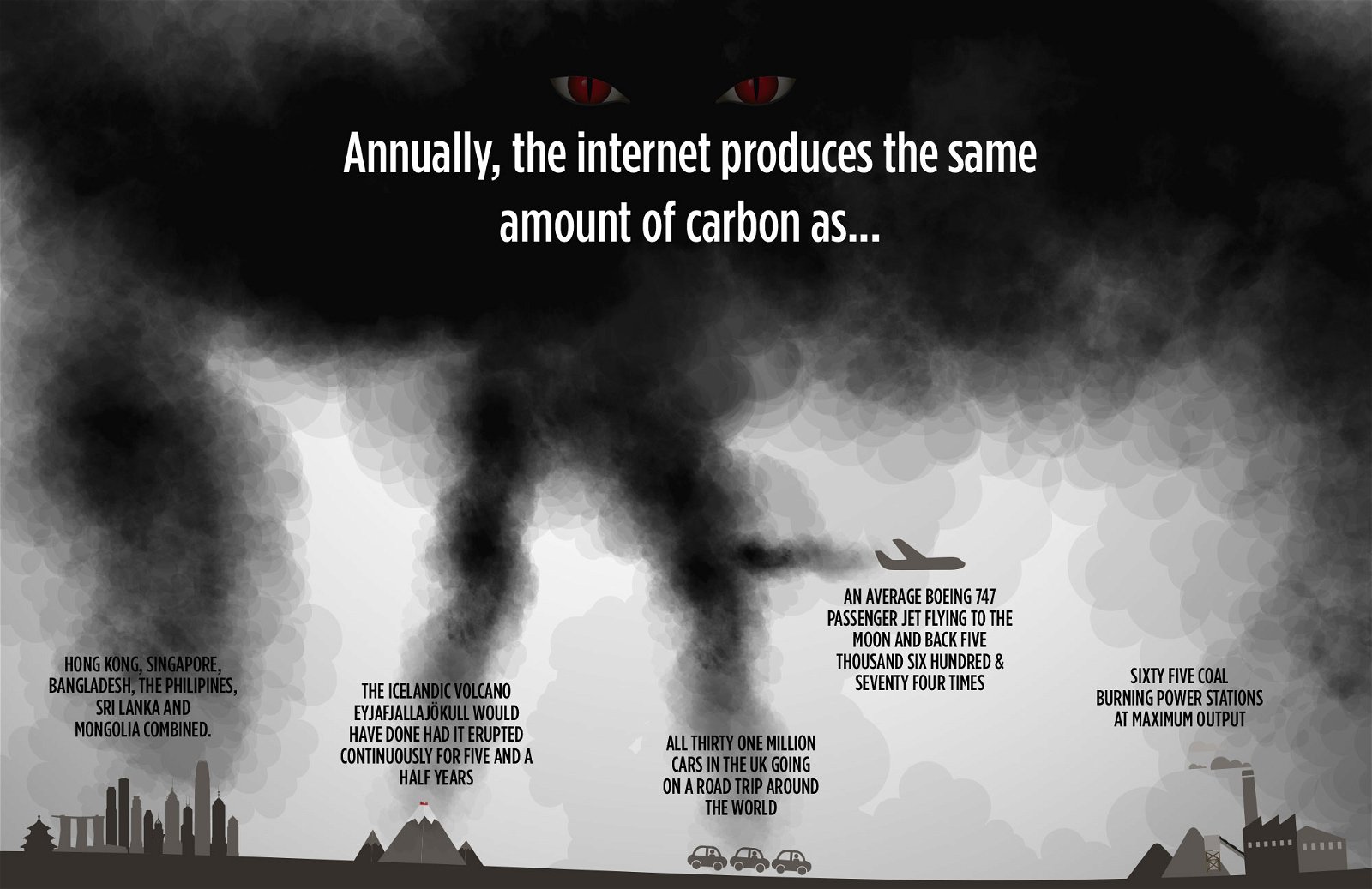 Check out the Earth Overshoot Day website to discover other ways that you can pledge your commitment to reducing your ecological footprint, such as by reducing paper usage and hosting vegetarian dinner parties. Whilst it's clearly going to take a lot more than eating more vegetarian meals to push this day back to the end of the year, with the recent Paris Agreement, we can at least take some encouragement that governments are taking climate change more seriously.

It's certainly food for thought. Who's up for eating vegetarian, tonight?

We're determined to only have a positive impact on our environment. Find out why we're becoming a climate positive business, and how you can help.

Using our green hosting? Be proud, show your visitors you care.

The Environmental Impact of the Internet – A Closer Look

Did you know the internet pollutes more than air travel worldwide? Click here to learn more and how simple ways to reduce your carbon footprint.